Come mid-June every year, the video game industry’s seminal press event, E3, hosts a barrage of cinematic trailers that usually reveal little more than the premise, characters and concepts of upcoming games. In what has become a shameless tradition in hype building, very few of these trailers will show off any actual gameplay; even fewer will show promise of pushing the boundaries of game design and offering up wholly new and innovative ways of play. It begs the question whether such games as Cyberpunk 2077 and Marvel’s Avengers, technically impressive and fully budgeted as they are, are exploring the possibilities of everything this exciting entertainment medium is capable of.

Especially in recent years, the onus has often fallen on indie developers –– fresh out of their Bachelor’s degrees and hungry for exposure –– to serve up something new, and to flaunt it in a packed 90-second clip. We have publishers like Devolver, Team17 and even Microsoft to thank for casting a spotlight on these new inventions.

This year I challenged myself with viewing as many E3 trailers as I could bare (I may have passed on the six or so Gears 5 trailers, forgive me), to culminate a short list of the few gems that are daring to push video games to new heights of gameplay and storytelling. Here’s what I found.

12 Minutes takes place in a couple’s apartment as a woman breaks the news to her husband that she’s pregnant. Suddenly a police officer is madly knocking on their door, convinced that the woman murdered his father. In the span of twelve minutes, the husband fails to mediate the situation as the officer kills the woman and her unborn baby, violently avenging his father. The player, as the husband, reawakens at the beginning of this twelve minute cycle, intent to unearth answers and prevent the scenario from unfolding again, and again.

This point-and-click thriller from Portuguese developer Luis Antonio (artist of The Witness) has been in development since 2014, and it’s reportedly heavily inspired by Stanley Kubrick films and Majora’s Mask. By accruing knowledge during each gameplay cycle, the player opens new dialogue options in future cycles, ultimately altering the course of how the situation plays out. What’s more, we’re being promised around six to eight hours of total gameplay – that’s a lot of cycles, and a lot of bite on this intriguing mystery.

Ninja Theory’s games share a common fervour for sophisticated melee combat. From the cult classic Kung Fu Chaos, to the DmC: Devil May Cry reboot and the psychological nightmare that was Hellblade: Senua’s Sacrifice, the Cambridge-based development studio aren’t shy of flinging themselves at wild, new challenges involving close-up action. Bleeding Edge, a team-based brawler in the vein of Overwatch, is their next exciting foray.

Far more tactical than a mindless brawler, Bleeding Edge is like League of Legends in third-person. Players choose between ten characters of three classes (assassin, support, or tank) and employ unique standard attacks, special moves on cooldowns and ultimates to topple the enemy. In true MOBA fashion, maps are split into lanes and encourage teamwork –– drawing in enemies with a grappling hook, or even, bizarrely, trapping them in an enormous bird cage while a teammate readies their heavy attack, for example. As another hero-based game however, Ninja Theory have their work cut out setting the game’s odd mob of characters apart from other failed imitations like Battleborn and LawBreakers. Hopefully its distinctive close-quarters, MOBA-esque design will be enough to push it to the forefront of the competitive esports scene.

A self-proclaimed “reverse horror” experience, Carrion is a metroidvania-horror game where you play as the monster: an amorphous, tentacled, bloody mass with layers of teeth and an unsettling taste for human flesh. As the monster, you interact with objects and lunge at scientists with your various tentacles, which can be enhanced with upgrades like spider webs for more creative kills. You also seem to grow in size as you chase down and consume humans and listen to their final screams. Obviously, these elements combine to make for a deeply pleasant gameplay experience that will surely bring together you and your loved ones.

The most interesting aspect of Carrion’s design is how the monster moves about the laboratory. Your tentacles allow you to glide through the air almost effortlessly, clinging to surfaces while you zip down drainpipes and up through vents. It’s not entirely a murderous rampage, however; you also need to get stealthy and find creative solutions as you go up against guns, flamethrowers, and tough armour that can’t be chewed through. For anyone who’s ever felt a profound connection to the Xenomorph in Alien, this should be right up your alley.

Few games explore the potential of interactive storytelling without any explicit violence. What stories might games tell when we’re not driven to kill or apprehend others? El Hijo’s gameplay asks that question in perhaps the most hostile setting imaginable: the wild west.

Inspired by Sergio Leone films, the game follows the titular El Hijo on a stealth mission through the harsh American West. After bandits attack the young boy’s farm and abduct his mother, El Hijo is left in the care of monks before he sets out on a quest to rescue her. The game eases players in with mischievous stealth and linear levels as you escape the monastery, before it escalates to greater levels of danger as you enter more open territory. Aside from sticking to the shadows and finding nifty hiding spots, El Hijo approaches stealth with playful puzzle-solving in mind; players might fire their slingshot at a bell to distract townsfolk, or spice up someone’s stew with chilli to send them running to the toilet. It’s looking like El Hijo will appropriate the best parts of Metal Gear Solid and Untitled Goose Game to become the most wholesome stealth experience in recent memory. 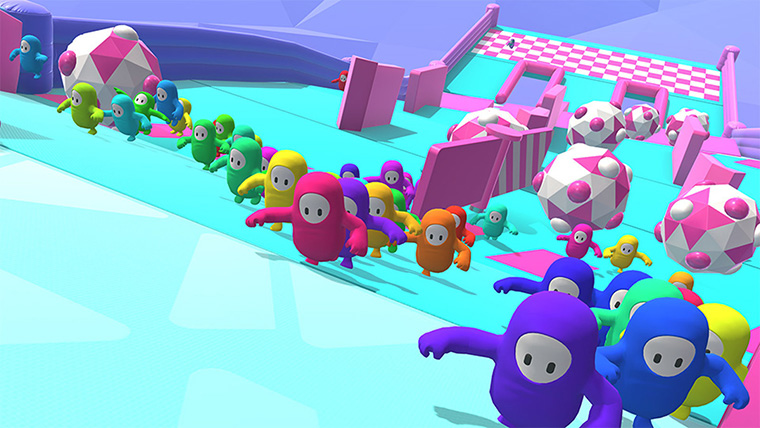 A written explanation won’t do Fall Guys much justice, but you’ll need one if you’re going to make any sense of its utterly bonkers trailer, which looks like a TV commercial for Froot Loops meets Inner Health Plus. In actuality, the game is akin to something more like American Ninja Warrior.

Fall Guys is a new take on battle royale games combining the best elements of WarioWare and Mario Party: one hundred players are thrown into a series of chaotic, nonsensical mini-games that you might see in a Japanese game show. The titular Fall Guys are jellybean people prone to stumbling over their tiny legs or walking into a swinging hammer, leading to consequences that are often hilarious if perhaps a little cruel. As players fall out of the race, the game introduces new challenges that are better suited to the total number of Fall Guys, eventually climaxing with a final sprint to the finish. With customisable skins and new mini-games patched in seasonally, Fall Guys is prepping itself to be the biggest party in online gaming. 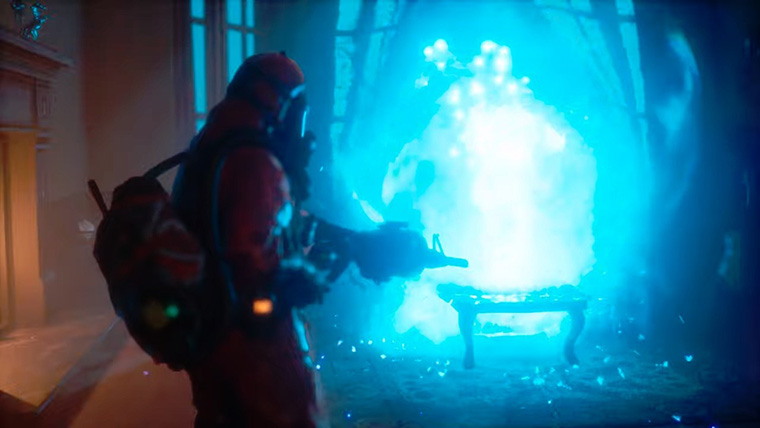 Asymmetric multiplayer games like Dead By Daylight, SpyParty and Deceit have a knack for trying out new gameplay possibilities, even inspiring major developers like id Software to attempt their own asymmetric game modes as in the recently revealed Doom Eternal: Battlemode.

Enter the literally titled Midnight Ghost Hunt, inspired by the Garry’s Mod game mode, Prop Hunt. Four ghostbusters must scour a haunted locale for four invisible poltergeist players capable of possessing inanimate objects –– anything from lamps, to chairs, to suits of armour. The hunters are equipped with vacuums and a selection of ghost detectors, which means the poltergeists need to stay on the move to keep the hunters from figuring out their hiding spots. If the poltergeists can remain undetected for four minutes, when the clock strikes midnight they can unleash all-out hell on the hunters, attacking them with furniture and ornaments and knocking them out cold. Next to Luigi’s Mansion 3, this was a great E3 for vacuum games.

Imagine if your Animal Crossing or Stardew Valley town was nestled somewhere in purgatory, and you’ve got Spiritfarer. Except it’s not just a town, it’s a boat –– a boat that transports the souls of departed animals to the afterlife. It pretty much takes place on the River Styx, but it’s not even close to how terrifying that sounds.

Not unlike those aforementioned games, Spiritfarer gives players the opportunity –– as the protagonist, Stella, and her faithful cat, Daffodil –– to connect with its characters, fulfil their requests and listen to their stories in a kind of social management sim. Spiritfarer differs however, with the ultimate goal of bringing its characters to rest and inevitably saying goodbye forever. This might involve visiting the character’s home and retrieving a treasured belonging, or something simple like cooking, gardening, fishing, mining or furnishing and redesigning your ferry and the animals’ cabins. Players can even hug the passengers, which, I mean, of course you can. Especially for children, Spiritfarer could be applied as a truly effective grieving tool, or at least as an entry point for discussing death.

Way to the Woods

The first game by 20-year-old Melbourne developer Anthony Tan, Way to the Woods looks like a beautiful, magical journey. Inspired by Hayao Miyazaki’s Spirited Away, the game follows a mother doe guiding its fawn through a surreal, post-apocalyptic world, steering clear of preying wolves and kissing her child to cast lights in the darkness. There are no humans in this empty and dilapidated city, only animals that seem to have developed magical qualities.

Way to the Woods is a story-driven experience that can be finished in one sitting, aligning itself with similar games like Journey and Abzū. Its gameplay mechanics are born from its story: as the mother doe, the player must explore abandoned buildings and dark railway tunnels, solving puzzles that involve illuminating those areas with the machines left behind there, from vending machines to TV screens. The mother doe must also scavenge for food to feed herself and her young, all the while avoiding and fending off predators. Hopefully these various parts will come together to resemble something like video game storytelling at its finest – it certainly seems as much.